In searching for visual metaphors for Joyce's master-built - Finnegans Wake - the great master of impossible objects to the eye - M.C Escher stands as a near perfect puzzle fit. If the word were able to be broken down into the 17 wallpaper - tessilations - then Finnegans Wake would be the SPANISH CASTLE MAGIC - the deployment of all wallpapers within a laboratory space - investigating and remixing itself, turning the world inside out, upside down with mathematical precision. Making the impossible equations of Quantum Mechanics and the newer fields of Consciousness studies into new MAPS, CHARTS, DIAGRAMS and TOOLS. With which to make further readings with.

Searching for M.C. Escher by name in Finnegans Wake turns up such possible - mini impossible ESCHER DRAMAS - made more probable by Joyce - such as:

"Fortissa, that Honuphrius has blasphemously confessed under
voluntary chastisement that he has instructed his slave, Mauritius, to
ur;,e Magravius, a commercial, emulous of Honuphrius, to solicit
the chastity of Anita. Anita is informed by some illegitimate
children of Fortissa with Mauritius (the supposition is Ware's)
that Gillia, the schismatical wife of Magravius, is visited
clandestinely by Barnabas, the advocate of Honuphrius, an immoral
person who has been corrupted by Jeremias. -- J.J. F.W. P 572.


"Of course, my
pledge between us, there's no-one Noel like him here to
hear. Esch so eschess, douls a doulse! -- James Joyce, Finnegans Wake, 588.

That's the point of eschatology our book of kills reaches
for now in soandso many counterpoint words. What can't be
coded can be decorded if an ear aye sieze what no eye ere grieved
for. -- J.J, F.W. P. 482.

"He beached the bark of his tale; and set to husband and vine:
and the harpermaster told all the living conservancy, know
Meschiameschianah, how that win a gain was in again. -- J.J, F.W. p. 358

I'll leave the rest to the imagination. Google Escher, look at his work, now read some of Finnegans Wake - and maybe even listen to some Theolonious MONK.
Posted by Steve Fly Agaric No comments:

GA is for GRAFFITI ABORTISEMENT

"There are doubtless millions of people that are fascinated by the technical prowess and exacting graphic skill of one, Maurits Cornelis Escher. His imagination captured mine at a very early age, probably the first visual art that actually grabbed my deficient attention. I developed an early interest in mathematics, no doubt assisted by the many wonderful prints that Maurits would labour over tirelessly. I have been considering ‘remixing’ his work for years, and its eventually come to pass. I’m working on a set of three tributes. ‘Writing Hands’ is also a tribute to the world of graffiti WRITERS, part of a new campaign ‘Human Writes’ aswell - although it seemed pretty obvious to substitute the drawing pens with a marker and an aerosol can, the execution was purposefully loose. -- CHU http://www.schudio.co.uk/blog/2009/m-c-escher-tribute-2-of-3/ 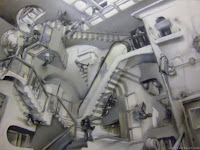 Some Aerosol Graffiti Artists’ manifest "imposseeblu" objects, sombunall based on alphabetical forms. Some BURST others bust! Graffiti Artist.n.t - blowing up - Alphabits with wind and semantext & putting word and world back together, back on the wall humpty fell from. Repairing the great language crash of 2009. Some Impossible lettengineers pay structural tribute to M.C Esher. Some experimental ASTRACTIVISTS use& Gurilla attack systems of Graffiti application, and deployment, adding to the information quotent within the surprise = information equation. span style="font-size:130%;"> CHU's latest TRILOGY are a self-described "tribute to M.C ESCHER and GRAFFITI ARTISTS worldwide." Parts 1 & 2 have been deployed already - we await the 3'rd. Waterfalls? 3 cubes? Mobius Strip II?

Bebop turned Broadway upside down. Graffiti Art and has turned the modern ART Gallery INSIDE OUT. The streets have become galleries, again. With hidden treasure and tales for attentive observers. Publik Big Brother public amuses himself, themself and itself. Most Graffiti Artists have an inbred rejection of faux icons and defend the word-world by perpetually turning things inside out. Outside in. Like the experience a witnessing an Escher world view.
Pirating instruments and techniques to decorate and reconstruct environments, out smarting culture vulture by decades. Aeons. Some Graffiti ARTISTS in 2009 are on the cusp of putting some meaning back into HUMAN RIGHTS with HUMAN WRITES. Making sense of a topsy turvey world, faux Image, woided-word and manipulated meaning - hijacked by the greed monsters, Advertising execorpses, Vulture Ministers and Whig Botherhood. Spin doctored. Antidoted by GRAFFABORTISEMENT! CHUSIDEOUT.

Notes and LINKS of interest:

"flip yourself head over heels, as if swinging over a waist-high horizontal bar in front of you. Now your heart is on the same side as the mirror-person's heart-but your feet and head are in the wrong places, and your stomach, although at approximately the right height, is upsidedown. So it seems a mirror can be perceived as reversing up and down, provided you're willing to map yourself onto a creature whose feet are above its head. It all depends on the ways that you are willing to slip yourself onto another entity. -- Douglas Hofstader. The Mind's I: Fantasies and Reflections on Self and Soul (co-edited with Daniel Dennett)"


"I also updated the piece to depict a modern market area, a supermarket or shopping mall, filled with glass panels (shamelessly achieved by the use of a paper edge). Instead of the three views culminating in exit points to organic backgrounds or nature, I chose to make the whole space an interior, with backgrounds of a shop, car park and a public sliding-door entrance. The figures are also modernised; cash machine, struggling pensioners, drunks, maintenance orderly and shoppers. -- http://www.schudio.co.uk/blog/2009/m-c-escher-tribute-2-of-3

"as if everything were not in displacement, detour, transference, metaphor everything is in the love potion of seduction... --Jean Baudrillard writes in Dust Breeding, 2001.

"The matrix is the kind of film about the matrix that the Matrix could have produced -- Jean Baudrillard.

"Consciousness is not only a way out of the evolutionary impasse, says Hilbrandt, but also an escape from the snares of Godelization, for by means of paralogistic contradictions this solution has sidestepped the contradictions to which every system that is perfect with respect to logic is subject. So, then, the universum of the personoids is fully rational, but they are not fully rational inhabitants of it. -- “Non Serviam” from A Perfect Vacuum: Perfect Reviews of Nonexistent Books by Stanislaw Lem. Copyright 1971 by Stanislaw Lem; English translation copyright 1979, 1978 by Stanislaw Lem, Reprinted by permission of Harcourt Brace Jovanovich, Inc."
Posted by Steve Fly Agaric No comments: