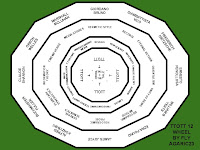 BALANCING THE EQUATIONS WITH TRIADS.

I view a part of my task in setting up a table of ttott correspondences as providing examples of how the tables can be used to create various effects. Both as study guides into historical, biographical work and as imagination guides into the tale of the tribe, and the new translations.

The triangular structure enables opposing characteristics of mildness and severity a point of resolution and of synthesis, a middle path that may recycle the energies back and around and in so doing balance the opposing forces. The general idea of dividing 30 characters into 10 sets of triangulated groups of three characters, for example, may provide a working model for a rough structure, as would 15 sets of waltzing duo's of opposing forces or a 'coincidance of contraries' as Joyce put it in Finnegans Wake.

I have developed number systems for working out the new maps, due to the possibility of multi-dimensional models at a latter stage of the project, whereby objects containing various symbols and images can be folded and enfolded. I have already experimented with a TTOTT Dodecahedron of 20 sides and 12 vertices, and in principle, the numbers 30, 60, 90,120 and 150 all render symmetrical objects upon which information may be presented, here I pay tribute to Buckminster Fuller, and Giordano Bruno.


THE TALLY OF THE TRIBE.

The set of 5 wheels I have designed each have 30 'nodes' on their belt of concentric rings. I made them by choosing 5 major categories: Tailors, Theolo, Texts, Teachings, Totems (Human Beings, Spirits, Texts, Principles, Objects).

I have chose to recycle 'T' words and keep a running TTOTT structure to each heading and category I make. The TTOTT logo features four 'T's tilted to create a four way symmetry (+) with a circle placed central. If you pretend to say the word 'T' you'll notice your tongue gets right up on your teeth, and if you make a repeated 'T' sound you may notice that you sound a little like a Hi-Hat cymbal, and, that you can repeat the letter 'T' faster and with more control than possibly any other letter in the English Alphabet? This will have some correspondence to the spoken word and spoken drum components to the class, but also keep the original TTOTT (the tale of the tribe) intact.

Giordano Bruno used the number 30 often when constructing his wheels and wheels within wheels. Although unlike Bruno, my belts are so far only attenuated to the TTOTT matter, and simply borrow the use of the number 30 and the idea of putting lists of things on concentric rings, 5 in total, producing 150 nodes, or images in Bruno's model, that I should add seems incredibly more complex and refined than my wheels. Reading Bruno recently led me to revisit the idea of having 30 things on revolving tables, something I used to anchor some themes in an early edition of my book: World Piss: 30 seals and the spore of the words.

All the characters that follow Bruno chronologically can appear on the wheels that he inspired, together with Giambattista Vico, (another philosopher of the revolutionary hermetic renaissance tradition), the tribal characters can ride the wheel, the turning tables of correspondences, and so unify in that movement, that ever-changing sensibility and decentralized and rotational wisdom. A revolutionary force.

The tale of the tribe must be a connected network, otherwise it is useless. A new team of nodal points, shared swarms that link together. The goal of a hologramic network, a poem, novel, screenplay, album, performing overlapping functions, working together.

The triple spiral symbolizes the rotational and spiral nature of the connected works of Dr. Robert Anton Wilson, the triad or delta that symbolizes femininity and the triple goddess. Vico and Joyce and Nietzsche feed off the spiraling principles of recorsi. Giordano Bruno and his "Memory Wheels" plus Giambattista Vico and his "Cycles of Ages", Frederich Nietzsche and the "Eternal Return", Ernest Fenollosa and the omni-directional radiance of "Chinese Symbolism", William Butler Yeats and his dynamic "Gyres" and "Unity of Being" and 'Symbolism', Ezra Pound and his "Revolutionary Calendar" and 'Ideogramic method of juxtaposition', James Joyce and his spiral powered "coincidance of contraries & resolution of opposites", Buckminster Fuller and the moving "Synergistic" principles. Meanwhile Alfred Korzybski and his "General Semantics", Marshall McLuhan and his "Global Village Tribes", Orson Welles and his "Neurological Cinematic Relativity", Claude Shannon and "Information Theory" and other recurring geniuses and their additional contributions to humanity intersect with connecting threads represented by Dr. Wilson. In my opionion at their most potent when writing on Joyce: the mother-load of compressed hermetic wisdom.


THE TURNING OF THE TRIBE

The new maps and seals I present are a work in progress and as far as I know a unique way of processing the information, and potentially a relatively simple and sharable method for others to conduct similar research.

I would like to present a kind of Top Trumps challenge to create an equally revolutionary belt of innovative thinkers, or simply use any combination of belts on any grouping of things that you may wish, make it new! Bio-seasonal, calendrical, astrological and cosmological belts for example, may add many useful functions, the possibilities are literally endless with this, but I have chose to stack and pack a krewe that I believe represent the tale of the tribe as defined by Dr. Wilson, quite a bunch', to perhaps provide a new platform for collaborative investigations, and new interpretations. Nodes or units of distilled cultural inheritance.