Growing up with the weeds in the UK from 1976-2000, has helped shape my experience and observation concerning the relationships between the gov't, media corporations and their effects upon culture, both my own local culture and--through the emergent technology of the internet-- into other cultures.

Today we are aware, i hope; of the global military industrial agricultural media beast that traverses the planet and beyond,aware of the programing. Healthyly suspecting the borg of modifying their database in favour of profits and a competitive edge rather than precise information, reporting, sharing and honest feedback. The opposite of a scientific approach.

It seems to me in light of the Newscorp hacking scandal that the model of the 'spy' and the spy's cloak and dagger strategy for achieving goals best suits the behaviour and actions of Murdoch, Rebecca Brooks, Hunt and the long list of dirty private investigators, sneaky journalists, colluding police officers and sympathetic double cross politicians.

"I am not saying its wrong, I am saying its the wrong interpretation of what I said."-- Rupert Murdoch, April 25th 2012


Due to the incredible influence Rupert Murdoch and his gang have had upon British culture built up by media monopolies on print, radio and TV, the domino effect--back through history-- produces a new Octopus conspiracy, I would say. Many slimy connections and sordid threads that resemble the tentacles of an Octopus, or rather, in fact probably not an Octopus, but something far more terrifying, like some-thing out of a H.P Lovecraft tale. 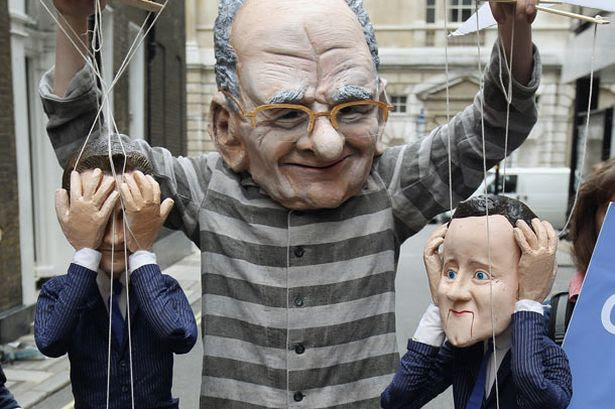 I imagine some people might think I am simply moaning about some hidden conspiracy that has prevented me from achieving my personal goals and utopian cultural revolutionary ideas, something approaching 'Open Source Democracy' as described by Douglas Rushkoff, or the open society of self owning ones, a miniarchy of those who run their own lives and contribute to the welfare of the tribe. The critical feedback on my experiences living in the UK are vented in hope that somebody else might read me and feel a similar disgust and outrage at how our so called 'leaders' and 'advisors' and even some 'teachers' never once warned us of the sho-nuff on-coming privatization of natural resources, the probable conspiracy between high level officials and simply sold us out, sold our ideas and our youth driven innovations to the highest bidder.

Rupert Murdoch portrays a perfect example of monopolist, greedy pig gangster, and the Newscorp hacking scandal gives us some evidence that the only warnings and echoes of caution, some doubt, healthy skepticism and trace of 'questioning authority, came from the underground arts, the fringe counter-culture, subversive literature, poets, comics, rebels.  I noticed even in my generation that for the most part the alternatives to the late capitalist agenda were eclipsed, demonized and co-opted by emerging global corporate beasts like Newscorp.


I'll leave it up to the political commentators to put the political octopus tentacles in place, for a few hints look just look up the transcriptions from the recent Leveson inquiry (25 April 2012) type 'phone hacking scandal' into Youtube, Wikipedia and Google, search, read and use what your mama gave you. See BskyB, Thatcher, the Miners strikes, Faulklands War, IRA, Cold War, Gulf War, Bush Senior, Barbara Bush and her relationship to Aleister Crowley, Hitler’s fake diaries, Invasion of Iraq, Afghanistan  and on and on, into the big stinking cess pool filled by historical news scoops of sewage, world events bent squashed and packaged like sausanges for the British state of mind to nibble on, just why is Simon Cowell's media imprint called syco?

"This deal lasted until Cowell persuaded Rupert Murdoch's Fox network to allow him to quit Idol and launch The X Factor in the US. The X Factor USA was outrated by American Idol last year, but has been commissioned for a second series.--http://www.guardian.co.uk/media/2012/apr/18/simon-cowell-biographer-access


I have often said in heated conversation, while pretty stoned that, for me, 1997 marks the year-- if I were to pick one--that my world collapsed and rebuilt itself into a labyrinth of conspiracy, triggered in part by 'D:ream' and their tune 'things can only get better' used by Tony Blair and the New Labour party to win a landslide victory over the Tories. Now, how much influence did the song have, or could that song have had? I presume it had much more influence than we give credit, but I am biased. More on this some other time.

The Australian TV series 'Neighbours' and its twin 'Home and away' and the deadly 'psycho' producers, are equally influential with their media intrusions into my own memories from back in my teen years, and based on the impact they had on those around me, these TV soap shows were a craze for quite a few years, everybody watched daily, and then talked about it like a secret code. (lets not forget ‘Sons and Daughters).

At school, at work and at home, 'Neighbours' and 'Home and Away', filled UK homes with absoloute crap, with the cute characters snatching our consciousness away quickly, totally, in ways that make most so called 'addictive drugs' pale in comparison. And what warning did we get? what models and metaphors were we given to encourage critical thinking on the production of these shows, on the stereotypes and often religious ideologies spun?

The most powerful multi-media industries in the world began a programme of turning screen stars into 'pop' stars, starting with Kylie Minogue, and Danni, Jason Donovan , Natalie Imbruglia, Stefan Dennis,  and others, not to mention the theatrical and movie industry boom and their strange favour for second rate, cute actors and actresses from either 'Neighbours' and/or 'Home and away". Why? Insight into the hidden sex status heart throb effect can be found here:


To me, in retrospect, this felt like a simple TV show that I watched a little, and that my friends and family watched too, suddenly spilling out into the record stores, radio air waves and other TV shows, into Hollywood movies, horrific adverts and international theatre tours like a science fiction inspired self-duplicating ooze.

It felt weird, and still plays on my mind in the night, along with all my memories of engaging with TV land from the years 1985-2000. How much did the TV and the print, radio and film media influence us back then? how and what did we do and think as a result of whatever 'programing' we happened to be in the firing line of? Who warned us of the EFFECTS of media, of monopoly on information and heaven forbid--banking scandals--con-men and con-women, fakes, hoaxes and tricks of the hand? who could have known?

I call for more open collaborative investigations into TV programing and other media monopolies on thinking broadcast throughout the 1990's, and to what extent money and profits and the ideologies of the likes of Rupert Murdoch were beamed into our minds, bodies and spirit? Please take a look at the ideas of Marshall McLuhan, Robert Anton Wilson and Cory Doctorow, John Perry Barlow and Tim B. Lee.


Here, now, we can awake from the media-sleep and see through the mask, for once and for all, re-writing our creative memories of media ooze with knowledge and evidence for fakery, hoaxing and deception, so, at the least leading us to look deeper and pay more attention to things, question everything, find your own 'rightness' and 'balance' and then, bounce it off those around you, and build a new history together where the forces of darkness and bullying can be excommunicated through knowledge and replaced with a new poetry.

Build the past, present and future all-at-once. Out with the old and in with the new, a media exorcism 2012. May those demons and bad spirits who have stifled and blocked our collective creativity, also become stifled and blocked, may the greedy creeps reap what they sew.

"Cowell is a supporter of the Conservative Party. In 2010, Cowell endorsed David Cameron to be Prime Minister and claimed that he has the 'substance and the stomach to navigate us through difficult times'.[81] In the aftermath of the election, it was reported that he had fallen out with fellow X Factor judge Cheryl Cole (who had declared her support for Labour and Gordon Brown) in a telephone conversation about politics.--http://en.wikipedia.org/wiki/Simon_Cowell 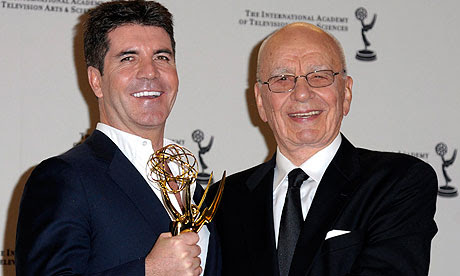 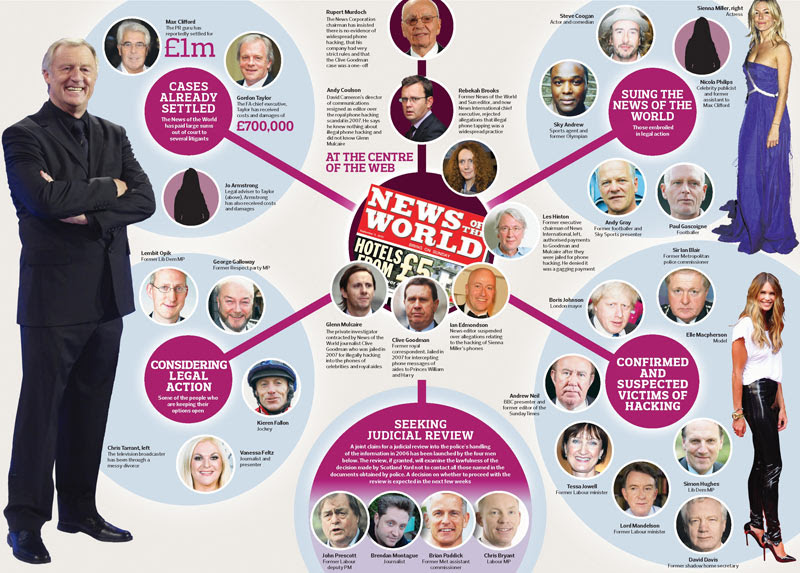