I is for Immigration: Fly drops some straight talk. 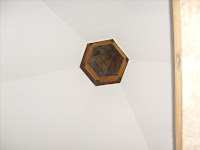 What the hell is going on? bird flu epidemic, a swine flu scare, what’s next...? Flying Pig Flew? How did hoof and mouth disease get such a name?

Maybe Cancer might become chancer over night, a tumour turns into a rumour at the dinner table, a terminal illness can now be seen as a simple term related illness at the hospital check out desk, even death can be revised optimistically to breath, at the end.

symbol structures that define you and your world – might entrap you – mentally, physically if you let them - new language provides a new path out of totalitarian states (inner and outer). Gno Word Order. Why don’t all those immigrant yeast spores fly back to the star system they came from? taking up our jobs and resources. Immigration, huh, do you think that the prefix (im) versus (em) can really help us when looking at migration of human beings?

I think that humanity should be able to traverse the globe as global citizens, citizens of earth, you dig, a nomadic-migrant humanity. I think immigration, the word, causes more than half of the problem concerning foreign migrating workers that wonder far from home, and then get portrayed by the satanic newspress, often as a straw-man, an immigrant.

From the point of view of valuing all humanity as citizens of spaceship earth - we are all migrating beings, you dig - depending on the time-map and language-metaphors used to describe any individual. So now, the immigration wing-nuts, who fan the flames of racial hatred, dogmatic communications and straight up racist lies would not be able to produce havoc surrounding immigration if they were not a part of the conspiracy to use immigration language trickery as a decoy, a straw-man argument and a political hot-dogmatic word-world-war potato to help raise the frustration, chaos and blood pressure of those on the receiving end of the warped messages and imperialist lingusitic deception. Crazy i know, but just hear me out here. OK.

Z is for Frank Zappa and Finnegans Wake

"Frank Zappa was born into a time when James Joyce was still alive: Joyce died on 13 January 1941; Zappa had been alive just 23 days (a number which always appears when your thoughts are concentrated on the Great, the Pleasurable and the True (2)). -- http://www.militantesthetix.co.uk/zappo/FZWAKE.htm

More from fly agaric on this soon...

C is for CUBE: CHU & Korzybski

The little promotional stickers that advertised 51 Degrees, the solo show back in April, had a website on the reverse pointing to www.schudio.co.uk/51. Visitors to this page would have seen a few different panoramas during the show, but at the moment its the final rendition of the Cubic Experiment.

After my group show, Jibbering Art moved the cube outisde. I had to recreate the floor and the ceiling, this gave me a chance to fill up the design a bit more, going for almost complete coverage. The floor was a large piece of reverse lino that took to the Edding pens really well, and was ably laid down by Big Chris and Jon from Jibbering.

Other details were added to the upper walls and some of the ‘rear’ wall, opposite the slogan.

The final effect was more than satisfactory and it continued to conceal a few secrets of its own.

See the final cube in its own FULL PAGE window, no need to download anything to see it, all you need is Flash installed (which most browsers have nowadays, if not then go here.)

"The proteiform graph itself is a polyhedron of scripture.
There was a time when naif alphabetters would have written it
down the tracing of a purely deliquescent recidivist, possibly
ambidextrous, snubnosed probably and presenting a strangely
profound rainbowl in his (or her) occiput.-- James Joyce, Finnegans Wake pg. 107. 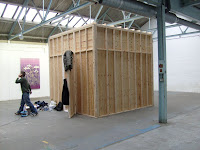 "Dr. Zellweger’s background is a combination of formal education and extensive research in the fields of Psychology, Pedagogy, Semiotics and Logic. Beginning in 1949, Dr. Zellweger spent his summer at the Institute of General Semantics with Alfred Korzybski. In 1975 he spent one year at the University of Illinois, Biological Computer Laboratory, under the direction of Heinz von Foerster. -- http://en.wikipedia.org/wiki/Shea_Zellweger