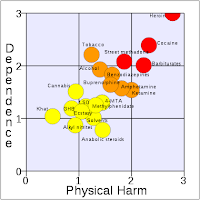 So called "Rational scale to access the harm of (some) drugs"

Although the following graph-scale (tool) for scientific study into the harm of drugs and the potential for misuse, its my feeling that maybe even David Nutt - the UK's disgraced independent drug researcher - seems stale, when compared with the likes of Lilly, Wilson and Leary who, I think, are the big three tenors of scientific research and experimental feedback upon altered states, and the impact on individuals and society of neurological relativism.

Three texts I would present as examples of superior research and communication concerning "consciousness research" and writing and thinking about "drugs", are:
Programming and Metaprogramming the Human-Bio Computer by John Lilly M.D
Sex, Drugs And Magik by Dr. Robert Anton Wilson

The Politics of Ecstasy by Dr. Timothy Leary.

Prof. David Nutt FMedSci a Corresponding Author Email Address, Leslie A King PhD b, William Saulsbury MA c, Prof Colin Blakemore FRS d e
Summary
Drug misuse and abuse are major health problems. Harmful drugs are regulated according to classification systems that purport to relate to the harms and risks of each drug. However, the methodology and processes underlying classification systems are generally neither specified nor transparent, which reduces confidence in their accuracy and undermines health education messages. We developed and explored the feasibility of the use of a nine-category matrix of harm, with an expert delphic procedure, to assess the harms of a range of illicit drugs in an evidence-based fashion. We also included five legal drugs of misuse (alcohol, khat, solvents, alkyl nitrites, and tobacco) and one that has since been classified (ketamine) for reference. The process proved practicable, and yielded roughly similar scores and rankings of drug harm when used by two separate groups of experts. The ranking of drugs produced by our assessment of harm differed from those used by current regulatory systems. Our methodology offers a systematic framework and process that could be used by national and international regulatory bodies to assess the harm of current and future drugs of abuse. --http://www.thelancet.com/journals/lancet/article/PIIS0140673607604644/abstract

Who knows what we might discover next week? or what we overlooked last week?


"Other similar species
Sarah added that the fungus' true identity had been shielded because there were other similar varieties but with different colour patterns. The secret, she said, finally came out when scientists at Cardiff University isolated the fungus' DNA and found it to be unique. --http://www.wildlifeextra.com/go/news/new-forest-fungus.html#cr

"ScienceDaily (Oct. 5, 2009) — Seven new glow-in-the-dark mushroom species have been discovered, increasing the number of known luminescent fungi species from 64 to 71. Reported in the journal Mycologia, the new finds include two new species named after movements in Mozart's Requiem. The discoveries also shed light on the evolution of luminescence, adding to the number of known lineages in the fungi 'family tree' where luminescence has been reported. --http://www.sciencedaily.com/releases/2009/10/091005123045.htm

"ScienceDaily (Dec. 22, 2009) — Giant rainforest trees, rare and beautiful orchids, spectacular palms, minute fungi, wild coffees and an ancient aquatic plant are among more than 250 new plant and fungi species discovered and described by botanists from the Royal Botanic Gardens, Kew in this, the botanical organisation's 250th anniversary year. The new species come from a wide-range of fascinating locations including Brazil, Cameroon, East Africa, Madagascar, Borneo and New Guinea. Nearly a third are believed to be in danger of extinction. --http://www.sciencedaily.com/releases/2009/12/091222104903.htm

"A new species of rust fungus, Maravalia perae on Pera sp. (Euphorbiaceae), from Brazil is proposed. Spermogonia are type 5 and aeciospores and urediniospores are asymetrically obovoid to ellipsoid, with a concave side and 3(–4) equatorial germ pores. Teliospore walls are 2–5 µm thick at apex around the apical germ pore. This set of characters differentiates M. perae from other species of Maravalia. A revised key to all known Maravalia species, including the newly discribed species, is provided.
Key words: Euphorbiaceae, pathogen, rust fungi, Uredinales --http://www.mycologia.org/cgi/content/abstract/101/2/239
Posted by Steve Fly Agaric No comments: